So it has been almost 3 weeks and a full box of pods since I have been using the new OmniPod system and thought I’d get a review out there for those who may be interested.  The first users that I know of were Melissa and Sarah that provided reviews as well.  I did start with a failed pod on my first try.  And I admit I was a bit concerned after that happened.  However it must have been a fluke since the rest have worked just fine.

The biggest difference, in my opinion, are the pods.  They are significantly smaller, thinner and lighter as advertised to be.  Are they still somewhat bulky?  Sure.  You cannot compare it to an infusion set.  However, compared to the original pods, there is a noticeable difference. 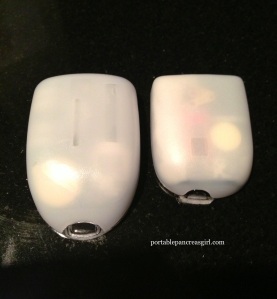 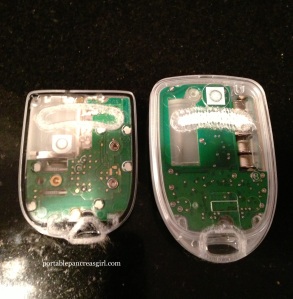 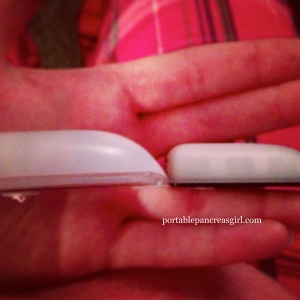 Keep in mind that the original pods never bothered me in terms of getting in the way or showing through clothes.  But who doesn’t want a smaller, lighter pod to wear?  There is a new pink insert on the top of the pod that should be noticeable if the cannula is inserted properly.  They also changed the cannula color to light blue to be more visible after being inserted.  I however, find the blue cannula to be no more visible than the clear on the original pods since they also changed the housing edge of the pod to black.  Maybe it’s my vision but also not a big deal.

The PDM also went through a makeover.  It looks different on first glance since it’s black and not blue.  Other than that, it’s the same size with the same buttons on the front to operate it.  Nothing new to learn there.  There were many additional confirmation screens added to various functions of the PDM.  The main one you will notice immediately is the PDM ID screen. 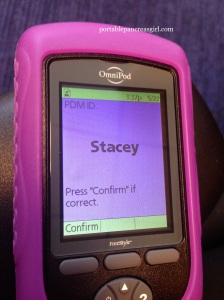 You must set a name and color for that screen and this will come up every time you turn the PDM on or enter a test strip for a BG test.  It can be a small pain in the rear to do this constantly but I have gotten mostly used to it.  I did not see the need for a safety feature like this however after viewing the training video, I can understand the need for it in say families that have multiple pod users.

There is a reminder an hour and a half after a new pod is activated to test your BG. 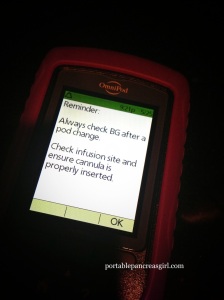 The IOB (insulin on board) calculation has not only changed but is also now visible on the status screen, something I am extremely happy with.  There are times when this information is invaluable and one should not have to scroll through various menus or screens to find it.  Readily available – the way it should be. 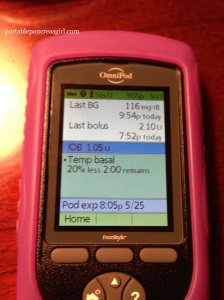 In the original system, IOB was calculated only with correction boluses.  With the new system, when the suggested bolus calculator is turned on, it will account for both correction and meal boluses for insulin on board.

There are also two new screens during the pod change process.  One showing more explicitly how to remove the pod’s needle cap and one showing how to properly apply the new pod. 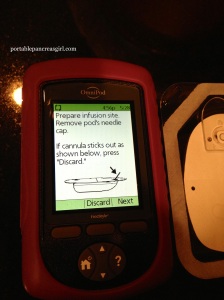 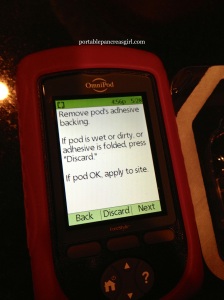 There is a new vibration mode for alerts.  I have most of the alerts/reminders turned off so the beeping of the PDM was never a bother to me.  But I still appreciate having this new option.  The functionality of the new PDM is not totally different.  And I think that can be a good thing for many.  Mainly a few new steps to get accustomed to, which I have already.

Overall I think the changes made by Insulet to the OmniPod system were good ones.  And I look forward to more positive changes to their system in the future.  Although hopefully the next ones will not take so long for us to see.

*Please note that since I am a current user of the OmniPod, I have not yet been upgraded by Insulet but instead purchased the new PDM out of pocket from a diabetes supply distributor.  I expect to still be officially transitioned at some point.

3 thoughts on “New and Improved.”