Tomorrow is an anniversary that I dread every year. A date that I wish the calendar could skip. A date that does not get any easier with time that has passed. Anyone who has lost a loved one knows the feeling.

On July 30, 2003 I lost my father. I lost the man who raised me so well. I lost the person who was always so supportive while I was growing up. I lost one of the closest people to me. I lost one of the parents that I love so much. I may not cry missing him as often as I did eight years ago but don’t be fooled that the hurt has gone away. His dying left a hole in my life that can never be filled. I hate each year that passes without him, even more than the one before. That means more and more time since I last saw him. Since I last spoke to him. Since I last got to hug him or tell him I love him. I don’t wish that he was still here suffering the way he did. I wish I could turn back time to when he was here and mainly healthy. When he was able to see better. Walk better. Feel better. Those are the times that I truly miss. And I loathe you diabetes for taking that away from him. Taking him away from us.

So much has changed since that day but one thing remains the same – the deepness of sorrow I feel without him. 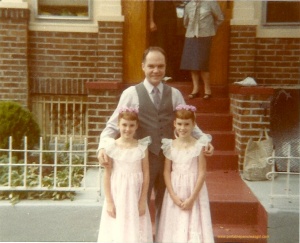 Here is my sister and I with him when we were around 8 and flowergirls in my cousin’s wedding. 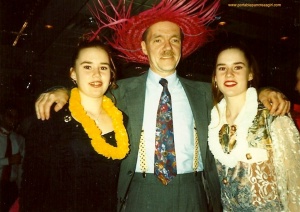 Here is my sister and I again with him at another cousin’s wedding around 1993 (I think).

9 thoughts on “A Date I Never Forget.”