So I’ve had a bit of a blogging hiatus, with a few things going on for me personally.  Luckily not all of it bad as we welcomed my nephew into the world last Sunday 🙂  Frank Micheal was a bit early and came very fast but he is doing well so far which I am extremely thankful for.  My sister, brother in law, big brother and sister are settling into their new “normal”.

Things on the diabetes front are going pretty well.  I had another appointment with my endo last week, with a consecutive A1c under 7%.  I posted after my last appointment, I was spending some time figuring out if my good A1c was a fluke or the result of hard work on my part.  But it appears that it was not in fact a fluke and something that I can hopefully hold onto.     As I will ring in my 31st year with T1D next week, this is music to my ears.

You may have seen some recent pictures I’ve posted on Twitter or Instagram of BG readings with a Bayer Contour Next Link meter.  Even though I don’t currently use a Medtronic insulin pump for the meter to link to, I purchased the meter and like it.  I have an older Contour Link meter but wasn’t too happy with its accuracy.  Having tried this new one out that uses Bayer’s new Next text strips, I find its accuracy running along the lines with the Verio IQ and Accu-chek Nano.  It supposedly is compatible with the Diasend software but I am currently having issues getting it to work on my MacBook.

Big news in the diabetes community came last week when Insulet announced that their new generation of the OmniPod insulin pump system was approved by the FDA!  Being an OmniPodd-er I was ecstatic hearing this.  I’ve been using the pods for 10 months now and have become extremely accustomed to using a pump that is tubeless.  However, since the pod itself is bigger and more bulkier than a typical infusion set, my concern about real estate reared its ugly head.  Having a one third smaller, one quarter lighter pod to wear will be a fantastic upgrade for pod users.  And it still holds the same 200 units of insulin!  Here are a few snapshots of the new system. 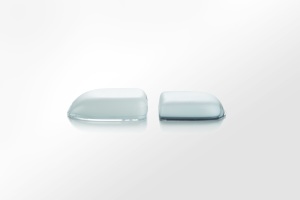 (images were provided by a communications consultancy firm, on behalf of  Insulet)

The new PDM also has some enhancements, although it looks pretty similar.  To check out some more detailed recaps of the new product from Insulet, read what Scott, Diabetes Mine and Rachel had to say.  I guess we will have to wait a couple of months to get our hands on this new insulin pump!

As the holidays and end of 2012 approach, I hope that each and every one of you have happiness and health to share with your loved ones.  I for one am hoping that 2013 brings more happy times than its predecessor, especially in the tri-state area.

6 thoughts on “End of the year. Already?”